baby, it's cold inside; echoes from a (social) distance #10 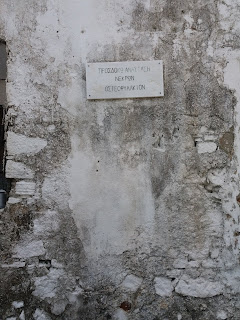 Whether I like it or not my mind travels back exactly three years ago. I think of the East Aegean and its European handled conflict zones - they called them “hot spots”.

I instinctively remember the days I had to witness non-medical around that time  “First Response” teams fighting another “enemy” which took the form of men and women – they called them “migrant flows”.

The sun is out today, it is the beginning of spring and we ‘re all waiting for Easter (of the coming year). I see people crossing hectically the street when they see strangers approaching from afar.

Three years ago it wasn’t bellum omnium contra omnes; the hygienic war was rather held between “us” and “them,” employees of various nationalities vs refugees of various failed states -  that was a social distance sponsored by seminars provided by the United Nations: “no handshakes, no touching please between employees and beneficiaries!”

From my balcony I gaze at passers-by fearful of being viciously attacked by virus infected outdoors surfaces.

Back once more, hoping it’s going to be the last time, only to recall the vivid memory of the disgusted disapproving looks of my colleagues every time I touched with my bare hands the 2.4 meter high metal fence of the camp decorated with two layers of razor barbed wire.

Do not enquire, you ‘ll find no causality here, only the bitter taste of the twisted plots of history.

The words is now a virus and makes me realize that… baby, it might be cold inside, but out there right now is burning hot!

As David Runciman recently put it,

“for now the war is all there is, and the peace will have to take care of itself.”