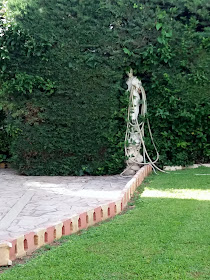 And yet, data is meaningless unless if we take the long and winding road and try to interpret them (always a risky business if you ask me):

600 million anxieties in light of an ever-changing world, panicked individuals running to catch a plane before the game is over – and how addictive that game it was!

...or is she not ‘smiling’? Who can really say? No one can decipher this mystery and, let me tell you, if we ever try to give a straight answer to ourselves it will put us in serious trouble.

We need vital lies in order to endure – what better way to hide your true feelings by simply smiling to a stranger? Not to mention your enemy!

We have to live with the ambiguity of Mona Liza’s smile the same way we ’ll never be able to look at an empty of scaffolding Parthenon. The constant questioning about her mood, as well as the everlasting propitiating of the ancient Gods at the Holy Rock, are both preconditions for the survival of our civilization.

Spells should not to be broken; Mona Liza must carry on with her ‘smiling’ and we should pretend that we ‘re getting any definite answers by hewing undying stones.

Human culture is our wild imagination framed as reality. It is an invented construction, downright fragile the moment we seize to believe in it, at times vulnerable to an enemy attack.

It’s not hard to imagine that the day that Mona Liza would have been safely store out of the public eye was approaching fast, as fast as the time it takes a tourist to exit the Louvre after he is done with his selfie.

Let’s face it, hordes of unappeasable and greedy tourists were putting her at risk needlessly – none of them ever left a museum enlightened, or at least moved a little bit, enough to make you cry, quit your job, travel for the rest of the year or write yet another left unanswered love letter to someone you briefly loved last summer.

One can only hope that by preventing the masses of tourists - armed with smartphones - to get anywhere near one of the holiest mysteries of our times, Mona Liza will become accessible once again to all the hungry hearts and the curious minds, the artists, the believers, the pilgrims, the scholars, the lovers, the dreamers, the desperate ones, the ones willing to offer unconditionally, in exchange for her smile, the most valuable of all things human: