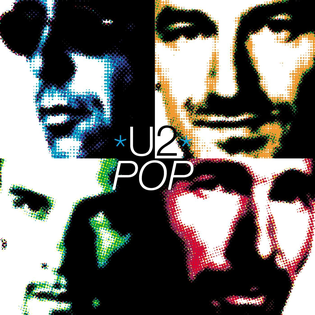 ‘Pop’ was released in 1997, exactly 10 years after U2 conquered America with the guitar riffs of ‘Joshua Tree’. I received the cd album as a present by an older cousin, my mission was to like it.

Truth be told, U2 were reasonably cool for the first years of my secondary education, not as much for high school. At that time, contrary to Bono, a victim of his personal greed, I had found what I was looking for:

not the mythical America of the open road and of National Parks such as Joshua Tree but the real America, the one pictured in the movies that were filmed at night in New York. Not the desert; the streets of Harlem and the CBGB. Fuck Hollywood, get neighborhood.

As I remember clearly, I was rather puzzled by Pop, meaning the word itself, not the music. The album, characteristically for U2, had a few pretty decent hit songs, the rest were second-rate though.

A question mark hanged over there: why did a rock band chose ‘pop’ for the title of what essentially must have been a typical pop/rock album?

By that time, pop was, for me at least, something fairly specific. It was music broadcasted by MTV that I wasn’t interested anymore. The Backstreet Boys, Madonna and/or even the camp aesthetic of Army of Lovers, that’s what pop was all about. When I thought of pop I thought of electric blue. Or pink.

In other words, I could have never have imagined that this three-letter tiny little word would have ended up signifying an ocean of interpretations and meanings,

generating literally millions of written words seeking to decrypt its meaning and/or reveal its higher purpose;