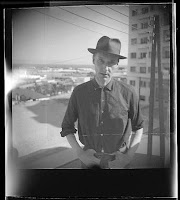 Let’s face it; William Burroughs never really had any job. He didn’t really need to work in his whole life the lucky bastard. Therefore, it only makes sense that he assigned himself certain tasks; tasks designed to substitute a man’s daily working routine (either academic work or the scavenger’s smelly mission). These goals had to be fulfilled in a precise and accurate way, that’s for sure.

When he felt like orienteering himself around the streets of a city by walking on “color association lines,” he was following an order coming from the more absolute kind of a boss one can have in his/her life: your own individual and eternal self.

I’m sure he had many other tasks to be completed on a day’s time the way an ordinary clerk working on the company’s downtown offices has it. I’m also quite sure that he reached perfection while taking care of these inescapable responsibilities as I’m perfectly sure that 99, 3% of the ordinary clerks fail to do so.

But that’s life, don’t you think? Life is full of losers + a bunch of winners-losers. Winners-losers like William S. Burroughs.


“I have met Burroughs quite a few times over the last fifteen years, and he always strikes me as an upper-class Midwesterner, with an inherent superior attitude towards blacks, policemen, doctors, and small-town politicians, the same superior attitude that Swift had to their equivalents in his own day, the same scatological obsessions and brooding contempt for middle-class values, thrift, hard work, parenthood, et cetera, which are just excuses for petit-bourgeois greed and exploitation. But I admire Burroughs more than any other living writer, and most of those who are dead.”

Email ThisBlogThis!Share to TwitterShare to FacebookShare to Pinterest
Labels: in english, William Burroughs