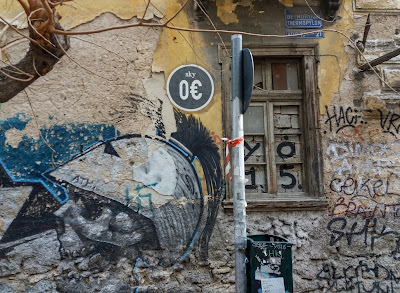 The billions of touristic photos of places of worship such as the Taj Mahal, the Parthenon, or CBGB’s are instantly evaporated into big data devoid of any meaning defying, mocking even, the idea of archiving. As we scroll down, data transforms from thin air into a toxic cloud that lies upon our heads.

Nothing compared to the reflections of the travelers of a bygone era which became books, passionate and doomed love affairs, poems, dreams that still keep us awake.

Tourists do not add value to historical sights the way travelers and romantics once did, irrespectively if their contribution was noteworthy, or even truthful.

Quite the reverse, they are facilitators of the current process of devaluation of the prominence of myths and tales that shaped the history of world cultures before they were transubstantiated into castles and temples.

Tourists are responsible for the endless reproduction of inadequate images of our world; images that resemble invisible walls made of mirrors which imprison reality into an infinite loop that repeats the same information again and again.

Shots that repeat themselves, photos that limit the scope of our imagination, colors that bring you headache generously provided by crude filters, images non-images that generate anguish by their uniformity, lack of creativity, total absence of ingenuity.

Thus, an island, an ecosystem with tens and hundreds of living organisms that interact with each other becomes merely a beach, a monotonous landscape which rhythm is not dictated by the forces of nature but by the cravings of spoiled children aged sixty five and above;

a city is reduced to a tiny corner of its historical center recently renovated by a hedge fund using stolen profits kept offshore;

as for the inhabitants, they become poorly paid extras in an enormous movie set where tourists hold the position of producer, director and the main protagonist; and yes, it is a major box office flop each time.

Email ThisBlogThis!Share to TwitterShare to FacebookShare to Pinterest
Labels: delirium, in english