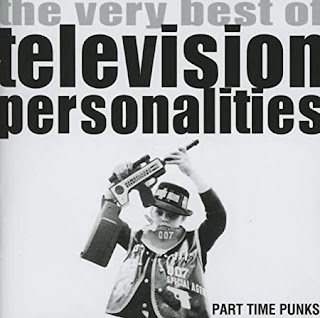 Music made consciously unprofessionally for an amateurish audience, that was the deal with the Television Personalities. We were all, both group and fans, ideologically driven over this matter. No one felt like raising any objections though.

Since we couldn’t easily find to buy their albums we had to settle with the very best of. The indie pop/rock band from London, self-described “Part Time Punks,” enjoyed a strange cult amongst us:

“we few, we frustrated few, we band of indies”.

Retrospectively, I think we must have been fascinated by the idea of being part time punks. With the focus on the “part time;” nothing in the world was cool enough to demand our full commitment. Back then, we felt we had the option of being part time lovers, students, bohemians, employees, art aficionados, friends. So why not even punks?

Personally, I fully endorsed my punkhood in the early hours of yet another fervent Saturday night full of good vibes and unmet, always unfulfilled countless as they were, expectations. As I returned home early in the morning, it must have been around 06:00, I armed myself with strained yoghurt and eggs. I threw the yoghurt at the entrance of the newly founded offices of the ‘Coalition of the Left and Progress’ across the street (reformists! reformists!). As for the wasted 3-egg omelette, it ended up at the windows of a Land Rover Defender that belonged to an army Major living in the neighborhood (fascist! fascist!).

The Television Personalities “Could Have Been Bigger Than the Beatles”. That was the time of irony and emotional safe distance. Currently, we are passing through the phase of melancholy and physical safe distance. In any case, the distance remains.

Television Personalities were embraced by Greek indie-pop rockers and venerated by C86 indies, devotees of bands such as The Pastels and The Wedding Present. Coined as ‘shambling bands’ by John Peel, this particular urban subtribe probably numbered two or three dozens of Athenians and exactly eleven enthusiasts from the rest of the country. Due to their anoraks and their strict eating habits the British C86 indies were once dubbed as ‘anoraksia nervosa’:

“the scene’s asexual, childlike fashion codes created a new bohemia based around purity rather than debauchery (even though, contrary to this puritanical image, these cuties were actually at it like knives)”.

So the years went by and their purity became puritanism; and as for the eggs inside my fridge, I fry them with asparagus and coconut oil.