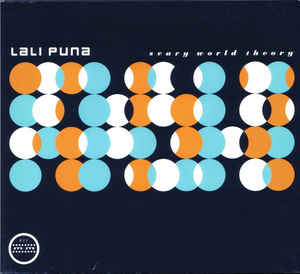 There was nothing scary in Scary World Theory, if there was a theory at all in the first place. The record came out by Morr, a Berlin label, a city that stood as a symbol of the widespread optimism during the early ‘00s. Morr soundscapes were characterized by pop serenity and emotional comfort, somehow akin to the atmosphere of the pop ambient series released by Kompakt, yet another euphoric Berlin music label.

We were right at the beginning of what was supposed to be our century. ‘Our’ ≈ European Union. These were the projections and anticipations of European experts and analysts that turned out to be in some way misguided: twenty years ahead of the 21st century, and even though no one really can tell for sure who’s century it is, we are utterly convinced that it isn’t Europe’s.

Scary World Theory came out in 2001, only a year after the millennium frenzy, when most Lali Puna fans weren’t troubling themselves with future dystopias and/or collective failures. Poverty and wars would have been an issue strictly located in Africa, ideological battles would be fought exclusively in Latin America, and anachronistic traditionalism would unfold merely in the Middle East.

Little did we know.