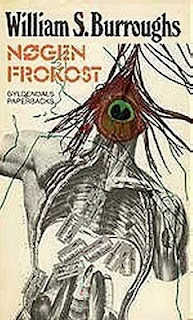 Early 1957, Jack Kerouac and Allen Ginsberg travelled to Tangier to join William Burroughs; their mission to assemble and edit Burroughs' many fragments of work to form a 'readable' Naked Lunch manuscript. Kerouac arrived early and, during a break from socialising with Burroughs, the 'old familiar lunatic', wrote to Lucien Carr and his wife Francesca in order to update them on the project's progress. That handwritten letter - essentially a fascinating account of Burroughs' behaviour in his prime - can be seen below. 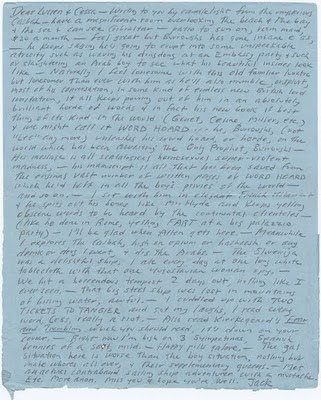 Transcript
Dear Lucien & Cessa — Writing to you by candlelight from the mysterious Casbah — have a magnificent room overlooking the beach & the bay & the sea & can see Gibraltar — patio to sun on, room maid, $20 a month — feel great but Burroughs has gone insane e as, — he keeps saying he's going to erupt into some unspeakable atrocity such as waving his dingdong at an Embassy part & such or slaughtering an Arab boy to see what his beautiful insides look like — Naturally I feel lonesome with this old familiar lunatic but lonesomer than ever with him as he'll also mumble, or splurt, most of his conversation, in some kind of endless new British lord imitation, it all keeps pouring out of him in an absolutely brilliant horde of words & in fact his new book is best thing of its kind in the world (Genet, Celine, Miller, etc.) & we might call it WORD HOARD...he, Burroughs, (not "Lee" any more) unleashes his word hoard, or horde, on the world which has been awaiting the Only Prophet, Burroughs — His message is all scatalogical homosexual super-violent madness, — his manuscript is all that has been saved from the original vast number of written pages of WORD HOARD which he'd left in all the boy's privies of the world — and so on, — I sit with him in elegant French restaurant & he spits out his bones like My. Hyde and keeps yelling obscene words to be heard by the continental clienteles — (like he done in Rome, yelling FART at a big palazzio party) — I'll be glad when Allen gets here. — Meanwhile I explores the Casbah, high on opium or hasheesh or any drink or drug I want, & dig the Arabs. — The Slovenija was a delightful ship, I ate every day at one long white tablecloth with that one Yugoslavian woman spy. — We hit a horrendous tempest 2 days out, nothing like I ever seen, — that big steel ship was lost in mountains of hissing water, awful. — I cuddled up with TWO TICKETS TO TANGIER and got my laughs, I read every word, Cess, really a riot. — Also read Kierkegaard's Fear and Trembling which you should read, it's down on your corner. — Right now I'm high on 3 Sympatinas, Spanish bennies of a sort, mild. — Happy pills galore. — The gal situation here is worse than the boy situation, nothing but male whores all over, & their supplementary queens. — Met an actual contraband sailing ship adventurer with a mustache. Etc. More anon. Miss you & hope you're well. Jack.
Posted by Abebe Bikila at 8:40 AM